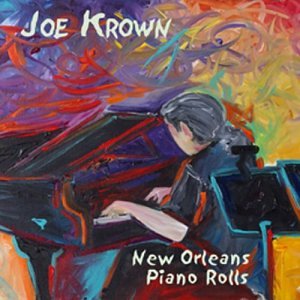 New Orleans Piano Rolls documents what is referred to as traditional New Orleans piano music. It is a good representation of what you might hear when you see Krown play solo piano performances. He is attempting to carry on the tradition of the great New Orleans piano styles, beginning with ragtime and continuing into boogie woogie and stride, all in the style of modern pianists, such as Professor Longhair, Dr. John and James Booker.

Joe Krown moved to New Orleans in 1992 after honing his keyboard skills in the Northeast. Since that time, he has built a strong reputation as first-call organist and pianist in the Crescent City. He won the 2001 Big Easy Award in the Blues category. He is an endorsee for Hammond Suzuki Keyboards. Krown and The Joe Krown Organ Combo made their television debut on Louisiana Jukebox in February 2000, which was broadcast in metro New Orleans, Baton Rouge, Shreveport, Opelousas, LA; Memphis, TN; Cleveland; OH and Austin, TX. He was a recent featured artist on LouisianaRadio.com. Krown was highlighted in a feature article in the September 2000 issue of OffBEAT Magazine. Krown's third compact disc, Buckle Up, was picked as the #4 CD of 2000 by The Times-Picayune's music critic, in the article Best of 2000 CDs. OffBEAT Magazine also selected Buckle Up as one of the Top 20 CDs of 2000. Krown was also named "Best Keyboardist, Editor's Choice," by NewOrleans.CitySearch.com.! Additionally, Krown has been a featured artist on the New Orleans Radio, Louisiana Radio, and most recently on InsideNewOrleans websites. The Joe Krown Organ Combo released its latest CD, Funk Yard, in May 2002 at the House of Blues in New Orleans. Krown returns to the piano for his new 2003 CD release, New Orleans Piano Rolls.

Krown has held the keyboard chair with the Clarence "Gatemouth" Brown Band since 1992, and is featured on the chart-topping The Man, Gate Swings, American Music, Texas Style and Back to Bogalusa albums. Since September 1996, he's held the Traditional Piano Night slot at the Maple Leaf Bar in New Orleans, which was once occupied by Professor Longhair and James Booker. Krown followed that strong tradition with his debut solo release Just the Piano...Just the Blues (1998). In 1998, he formed the Joe Krown Organ Combo, which makes regular appearances in New Orleans at such noted clubs as the Maple Leaf, House of Blues, and Storyville District. Krown's second STR release, Down amp; Dirty (1999), explores classic organ combo material reminiscent of Booker T., Jimmy Smith, Jimmy McGriff and others. Krown's Buckle Up (2000) follows his Down amp; Dirty release as another outing featuring his mighty Hammond B-3 organ. He called on the talents of the finest musicians in New Orleans to give life to this set of seven originals and four carefully selected standard organ tunes. Original Meters bassist George Porter, Jr. and Dr. John drummer Herman Ernest form a solid and funky rhythm section for organist Krown, saxophonist Eric Traub and guitarists John Fohl and Clarence "Gatemouth" Brown to cut loose with groovy melodies and strong solos.

In 2000, Krown (on piano) joined forces with Jumpin' Johnny Sansone (harmonica and vocals) and John Fohl (guitar and vocals) to form Sansone, Krown, amp; Fohl, a delta blues trio that has been gaining notoriety and has landed an appearance at the 2001 New Orleans Jazz and Heritage Festival.

"p"In 1998, Krown released his STR debut Just the Piano...Just the Blues to rave revues. That recording captured one aspect of Joe's musical personaÂsolo piano in the boogie/blues style. With his second effort, Down amp; Dirty, he wanted to document another dimension in his musical styleÂthe classic organ combo sound reminiscent of Booker T., Jimmy McGriff, Jimmy Smith, and Bill Doggit. Joe called on his bandmates from both Gatemouth Brown's band and the New Orleans swing group, Amy and the Hank Sinatras to lend their talent and songwriting skills to this project. The CD features mostly Krown originals with a couple of covers. Among the guest artists are Clarence "Gatemouth" Brown, Jumpin' Johnny Sansone, Eric Traub, and Amy Adams. Since its release in April 1999, Down amp; Dirty received several excellent revues and the combo's shows have met with very enthusiastic audiences.

Avail your complimentary Times Prime membership for 1 year worth ₹999

Does the Evergrande turmoil in China have implications for India?
Devina Mehra | Chairperson and Managing Director, First Global
ET STOCK INSIGHTS FOR THE DAY

The hows and whys

Is permanent WFH possible in India?

View: India needs a new pedagogy, not any Kota factory
View: Back home happy with Biden Bhai
View: Why it's time for India to give Modern Monetary Theory a chance

What Emma Raducanu can learn from Roger Bannister is to not be unidimensional
Kohli move to resign as T20 skipper after World Cup could affect India’s performance
Why India’s IPL and World T20 bound players cannot afford to test positive in England
Are we treating our international cricketers and sportspersons like gladiators?
Opinion »

Stories you don't want to missPOWERED BY MEDIAWIRE

Be part of Australia India Business Exchange 2021, join here
Why is there a rise of institutional investors in Crypto-ventures
How CRED pay is maximising the utility of CRED coins

U Gro Capital on hiring drive; plans to double workforce by end FY-22
India reports 29% surge in employment across nine sectors in June quarter: Labour ministry survey
Looking for a job? TCS is offering a free course to improve your employability skills. Here are details
Jobs/Careers »
BrowseCompanies:
ABCDEFGHIJKLMNOPQRSTUVWXYZ
123456789
BACK TO TOP